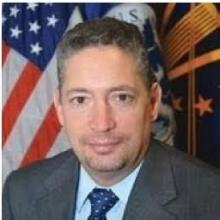 Prior to his work with HHS, Mr. Greene served as Deputy Assistant Secretary for Operational Medicine and Health Support within the newly formed United States Department of Homeland Security Office of Countering Weapons of Mass Destruction (CWMD) as well as Deputy Assistant Secretary and Deputy Director of the DHS Office of Health Affairs, a predecessor to CWMD where his work was focused on bio-detection, biosurveillance, as well as chemical defense and food and agriculture security.

Before joining federal service in 2008, Mr. Greene spent over 20 years serving in public safety response and preparedness roles at the local level. His career includes line and executive level positions with fire
service, law enforcement and emergency medical service agencies. He has provided leadership to some of the country’s most progressive and innovative EMS systems including several high performance EMS operations in major U.S. cities.

Mr. Greene received his appointment to the Federal Senior Executive Service in 2013. He holds a Bachelor of Science degree from Charter Oak State College and attended the University of Connecticut Graduate School as well as Keene State College in New Hampshire. More recently, he attended Harvard University’s National Preparedness Leadership Initiative and received a certificate in public leadership from the Brookings Institution / Washington University at St. Louis. Mr. Greene is a graduate of the Connecticut Municipal Police Academy, and has maintained licensure as a paramedic in that state since 1990.