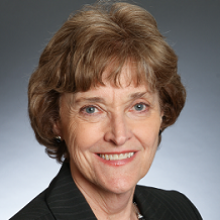 Judith Monroe’s professional focus has centered on the intersection of primary care and public health. Her career has taken her from private medical practice to academia, hospital administration and public health protection. In February 2016, Monroe was named president and CEO of the CDC Foundation. The CDC Foundation has a mission to help the Centers for Disease Control and Prevention (CDC) do more, faster by forging effective partnerships between CDC and philanthropic and private sector organizations and individuals to build public health programs that make our world healthier and safer.

Prior to joining the CDC Foundation, Monroe worked for six years as a CDC deputy director and served as director of the Office for State, Tribal, Local and Territorial Support (OSTLTS). At CDC, Monroe oversaw key activities and technical assistance supporting the nation’s health departments and the public health system.

Under her leadership, OSTLTS launched the National Public Health Improvement Initiative (NPHII) and developed and expanded the Public Health Associate Program (PHAP). PHAP began with 10 associates per year and grew to nearly 350 associates serving 44 states, one territory, and the District of Columbia at state, tribal, local, territorial, federal, and non-governmental public health organizations. Monroe represented CDC on the U.S. Department of Health and Human Services’ Secretary’s Tribal Advisory Committee and led OSTLTS in advancing the work of the CDC Tribal Advisory Committee and tribal affairs at CDC.

Before joining CDC, Monroe served as the state health commissioner for Indiana from 2005 to 2010. She was president of the Association of State and Territorial Health Officials (ASTHO) from 2008 to 2009 and conceptualized and launched the first ASTHO President’s Challenge, which continues to be an annual challenge for state health officials to focus attention on a critical national health issue.

Monroe began her clinical career as a member of the National Health Service Corps at the Morgan County Medical Center in rural Tennessee, confronting the ill health that poverty-stricken and remote populations face. As a clinician educator, she joined the faculty in the Department of Family Medicine at Indiana University and led the department’s work in rural communities. She then joined St. Vincent Hospital in Indianapolis in a dual administrative role as director of the Family Medicine Residency Program and the Primary Care Center.

Monroe has served on many national advisory committees and boards, such as the Public Health Accreditation Board, Global Health Leadership Council, Robert Wood Johnson Foundation Public Health Leadership Forum, the Institute of Medicine’s Roundtable on Population Health, and the National Advisory Committee for the Indiana University Richard M. Fairbanks School of Public Health. Among her numerous awards she received the Womenetics POW! Award, which recognizes excellence in leadership, the ASTHO National Excellence in Public Health Award and the Governor’s Distinguished Service Medal from then Indiana Governor Mitch Daniels.