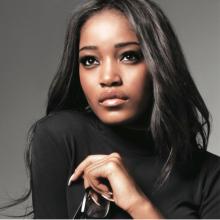 Philanthropist and Talk Show host are only a few titles the 25-year-old megastar holds. With 15 years in the entertainment business, Keke Palmer's resume is quite impressive.

She began her career with a breakout role in the film “Akeelah and The Bee", and then starred as the title character in the hit cable series “True Jackson, VP,” for which she received four NAACP Image Awards for Outstanding Performance in a Youth/Children’s Program.

She has gone on to star in over 21 feature films and award-winning television shows, most recently the Emmy Award winning “Grease: Live” and “A Trip to Bountiful,” for which she earned an NAACP Image Award nomination for Outstanding Actress in a Television Movie, Mini-Series or Dramatic Special.

Palmer also made Broadway history as the first African-American and youngest actress to star in Rodgers and Hammerstein’s iconic 1957 musical, “Cinderella.”

Keke was hand chosen by Ryan Murphy for her most recent television role as ZayDay in Fox's Scream Queens. Her first book "I Don't Belong To You " was released by Simon and Schuster in January 2017.

Keke is currently starring in Berlin Station , filming season 3 of EPIX's Show in Budapest, Hungary , and she is set to star in MTV’s “Scream and upcoming Lionsgate film “#TwoMinutesofFame.” Keke is set to release new music from her indie record label "Big Bosses Entertainment" this Spring.

Keke continues to be a life-changing philanthropist- as she co-founded the Saving Our Cinderellas Program on Broadway, with her Saving Our Daughters, where she inspires  girls of all cultures across the country in the areas of music and the arts. Having come from an improvised community herself , she understands the importance of providing  children with hope that their dreams can come true as well!