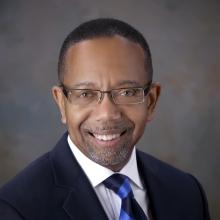 A native of Nashville, Tennessee, The Rev. Dr. Kenneth S. Robinson earned his A.B. and M.D. from Harvard University, and a Master of Divinity from Vanderbilt.  Accordingly, he has pursued a professional synthesis of medicine and ministry; focused on the promotion of health in individuals, families and communities - holistically “healing the land.”

Dr. Robinson was recently named the President and CEO of United Way of the Mid-South (UWMS), overseeing management and operations of this pivotal organization, which annually mobilizes more than $20 Million in donations and a plethora of other resources to meet priority needs of individuals and families.  He serves as UWMS’ representative to its key external partners and supporters - including over 80 agencies located in seven counties in Tennessee, Mississippi and Arkansas; 30,000 individual donors, private and corporate foundations, government agencies, legislative bodies and the media.

Since 1991, he has served as Pastor and Chief Executive of St. Andrew AME Church in Memphis, Tennessee.  The entire nationally acclaimed St. Andrew Enterprise - including its Community Development Corporation which has built housing for 115 low-to-moderate income families, and its nationally-accredited charter elementary school - has become a major stakeholder in creating a healthy, sustainable community.  It is responsible for over $22 Million in total investment in South Memphis from private philanthropy and public sources.

Dr. Robinson served an historic four-year term as Tennessee’s Commissioner of Health. Overseeing 3500 employees and a $548 Million budget, he created a culture for improving the state’s historically poor health status. Before joining the Governor’s Cabinet, he spent 21 years both practicing and teaching Internal Medicine at Vanderbilt, as an Assistant Dean at the University of Tennessee College of Medicine; and subsequent to his tenure as Commissioner, as a Public Health Advisor to the Mayors of Shelby County.