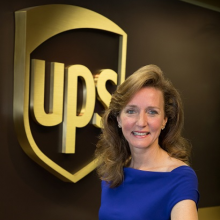 Prior to joining UPS, Laura was Managing Director and Head of International Government Affairs at CitiGroup. She directed the day-to-day advocacy efforts of Citi’s international government affairs team. Before joining Citi, Laura was VP for Global Public Policy with Time Warner where she represented the company on federal and international levels on all issues affecting Time Warner and its divisions.

In her government career, Laura was responsible for bilateral trade affairs with the Middle Eastern and Mediterranean countries at the United States Trade Representative (USTR). There, she also negotiated market access commitments on trade in services with China as part of its accession to the World Trade Organization (WTO) and served as U.S. negotiator for the WTO Financial Services negotiations, which resulted in a first-ever global agreement in 1997. Laura served in the U.S. Foreign Service from 1990-1997. She worked in the Trade Policy and Programs office in the Bureau of Economic and Business Affairs at the U.S. Department of State from 1995-1997. She served as the State Department representative on the US Basic Telecommunications negotiating team, which concluded the first-ever global agreement on basic telecommunications in 1996. Laura also worked in the State Department Operations Center from 1994-1995 as watch officer under Secretary Warren Christopher.

In her overseas assignments, Laura was the economic and political-military affairs officer at the American Embassy in Kigali, Rwanda from 1993-1994. She led the evacuation effort of American citizens from Rwanda in April 1994 with the outbreak of the civil war and returned in August as political advisor to U.S. forces providing humanitarian relief to Rwandan refugees. Laura subsequently appeared as a commentator on the Rwandan conflict on Nightline and in the PBS/Frontline documentary “Ghosts of Rwanda.” She also served as consular officer in Bogota, Colombia from 1990-1992. In her state department career, she was the recipient of two Superior Honor awards and a Meritorious Honor award.