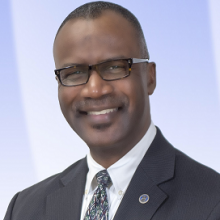 Michael A. Finney is an entrepreneurial executive with an extensive track record of success in leading private sector and non-profit organizations.

Mike recently founded Community Ventures Resources, Inc. (CVR), where he serves as President and CEO. CVR is a “social impact” consulting team that assists communities with development and execution of strategic plans designed to create a pathway out of poverty for populations who are disconnected from employment resources.

Prior to his current role, Mike served Governor Rick Snyder as Senior Advisor for Economic Growth and President & CEO of the Michigan Economic Development Corporation (MEDC).

Mike currently serves on the Saginaw Valley State University Foundation Board of Directors, the City of Flint Michigan-Receivership Transition Advisory Board, and the New Economy Initiative for SE Michigan Advisory Board. He previously served as Chairman of the Michigan Strategic Fund, member of the State Science and Technology Institute, the Detroit Riverfront Conservancy, Washtenaw Community College Foundation and the Michigan Venture Capital Association, Boards of Directors. Mike also served on the National Advisory Councils for the University of Michigan Office of Technology Transfer, Life Sciences Institute and Center for Entrepreneurship.

He has received numerous awards and recognition including the 2014 Michigan Venture Capital Association Lifetime Achievement Award; 2012 Michigan Chronicle Legacy in Motion Newsmakers; Named by Crain’s Detroit Business and one of the 2010 “Most Powerful People” in Michigan, 2008 Saginaw Valley State University Outstanding Alumnus for the College of Business and Management; named by Crain's Detroit Business as one of the 2007 Newsmakers of the Year; and the 2005 Minett Distinguished Professor at Rochester Institute of Technology.

Finney holds a Master of Arts in Human Resources from Central Michigan University and a Bachelor of Business Administration from Saginaw Valley State University.