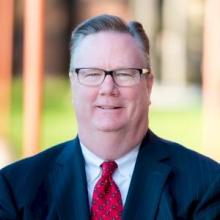 Michael Ralston was named president of the Iowa Association of Business and Industry (ABI) in November of 2005.

Prior to his service as ABI President, Ralston was appointed and served for almost three years as Director of Revenue for the State of Iowa. He led a staff of nearly 400 employees in administering Iowa’s tax laws, collections operations, internal audit systems and other essential functions.

From 1999 to his appointment, Ralston was Director of Policy and Law for Iowa for Qwest Communications, an international Fortune 500 telecommunications and broadband services company. Ralston led the company’s governmental affairs and community affairs in Iowa, with primary responsibility for representing Qwest with Iowa’s Governor and Lieutenant Governor, the Iowa General Assembly, and the Iowa Congressional Delegation.

Prior to joining Qwest, Ralston was president of the Iowa Taxpayers Association, a statewide corporate tax policy organization. Ralston has also served as the chief executive of a local government tax research organization, as corporate vice president with a health services company, and as chief Iowa assistant to former Congressman Cooper Evans. Ralston was elected mayor of Grundy Center, Iowa at age 18 and re-elected three times.

Ralston is a past member of the board of directors of the Iowa’s Jobs for America’s Graduates program, he Board of Trustees of the U.S. Governmental Research Association and is a member and past member of several other boards and organizations.

Ralston holds a B.A. from the University of Northern Iowa, which recognized him as an Outstanding Alumnus in 1992.