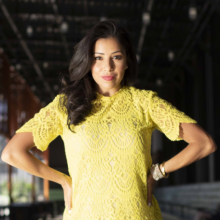 In the ever expanding and often cookie cutter entertainment business, the Egyptian princess known as Myra Sky is poised to become a radiant fixture in the Music and TV Industry. Born to Egyptian parents in Boston Massachusetts, and raised in Knoxville Tennessee, Myra Sky grew up under strict cultural principles where becoming a professional singer and tv personality couldn't be any more far-fetched. "I literally felt like I was raised in a box, my parents loved me very much and didn't want me to be exposed to anything that could taint the values they instilled in me so I was very sheltered" Myra humorously explains.

Myra Sky developed a burning love for entertainment and started performing at the age of 7. "It would feel like I was in a world of my own and I knew my voice was something that no one could take away from me" she says… "As a young child music was my means of exposure to the world, and so it's no coincidence that it also became the best way I know how to truly express myself” she says.

As Myra Sky grew older, so did her passion and focus. In college she kept busy by performing at various talent shows, and singing the national anthem at many sporting events all over the city. At the beginning of her college years Myra Sky relocated to Atlanta, Georgia to pursue a career in music. She quickly became known around town for her outstanding performances and received top honors at many of the hottest showcases in the city. Myra Sky had confidence that she possessed the talent needed to succeed as a professional artist.

All the diligence and hard work she put in finally paid off when Record Executive Alvin Bailey recognized Myra Sky's potential to become the next big star. Soon after, Myra Sky was offered a production deal with Payeback Music Group. "There is an inner beauty about Myra Sky because she believes in herself and she's one of the hardest working artists I've met!!" says CEO Bailey.
Towards the tail end of 2011 Myra Sky signed with the Payeback Music Group, and relocated to New York City. In early 2012 she was selected to be a contestant on Season 3 of NBC’s hit show “The Voice”. “The Voice was a really great experience that taught me nothing less than 100% dedication to your craft is acceptable for success” Myra explains. In 2012 Myra released her 1st debut album License II Love. Myra toured inspired by her album succeeding in America and overseas. As she evolved in the music industry her passion for television did too.

In 2014 Myra welcomed the opportunity to join the NBC TV News Station in Atlanta, Georgia. She has now become a Community Influencer on and off air helping highlight individuals and organizations making change in Atlanta. “It is an honor to support organizations and individuals making a difference, and it is my honor to use my megaphone to help make the world a better place.” Throughout the many obstacles along her journey Myra Sky has remained confident, strong, and determined to be a shining light. Most importantly Myra Sky strives to be a humanitarian to change lives all around the world. "I really want to use the voice and influence I will have to positively shape tomorrow's future and give hope and motivation to as many people as possible", she says with the greatest sincerity.