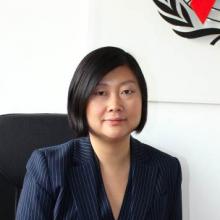 Taona Nana Kuo is a development economist and public policy specialist by training, with 13 years experience in Global Health, rural development, HIV and public health in Asia and the Pacific.  She is currently the Senior Manager of the Every Woman Every Child Health Team in the Executive Office of the UN Secretary-General, United Nations, New York.

Prior to joining the UN Secretary-General’s Office, Taona Kuo was the UNAIDS Country Coordinator a.i in China and spent over 5 years working in China with UNAIDS. She coordinated the China UN system support to the 4th International Roundtable on China-Africa Health Cooperation, the first Roundtable to be held in Africa in Botswana, May 2013. She also provided inputs to the first Ministerial Forum of China-Africa Health Development under the Forum for China-Africa Cooperation (FOCAC) held in August 2013, which recognized the role of international cooperation partners.

Before joining the UNAIDS China office, Taona Kuo was the Regional Adviser based in the UNAIDS Regional Support Team for Asia and the Pacific (RST AP), Bangkok, Thailand.  In her regional function she provided significant technical support to the independent Commission on AIDS in Asia, which produced a Report submitted to the UN Secretary-General in early 2008.  This Report includes the most comprehensive analysis of the HIV epidemic in Asia and provides strong policy and programme recommendations for countries.  Following the 2004 Asia Tsunami and 2005 Pakistan earthquake she was instrumental in developing of regional and country level strategies and tools for integrating HIV into the humanitarian responses consistent with humanitarian reform in the region and at the global level.

Taona Nana Kuo also has extensive experience working in China at various levels for the UN, bilateral donors, and civil society, including working on rural development for almost two years in the Tibet Autonomous Region (TAR) with the European Commission.

Taona Nana Kuo is a British citizen of Chinese origin. She received her formal education in the United Kingdom in Economics and Public Policy and has a post graduate degree from the London School of Economics and Political Science (LSE) in Development Management