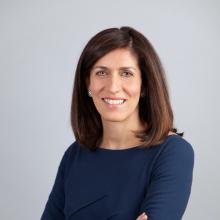 Nina Rees is the President and Chief Executive Officer of the National Alliance for Public Charter Schools, the leading national nonprofit organization committed to advancing the charter school movement. She is responsible for setting the strategic vision of the organization, fundraising and working with her senior team to foster a climate in which charter schools can grow and have a positive impact on the academic achievement of all students.

Rees has over 20 years of experience in Washington, D.C., most recently as Senior Vice President for Strategic Initiatives for Knowledge Universe, a leading global education company with investments in early childhood education, before- and after-school programs and online instruction.

Prior to her tenure at KU, she served as the first Deputy Under Secretary for Innovation and Improvement at the U.S. Department of Education. In this capacity, she oversaw the administration of 28 grant programs, supporting 1,300 projects, and was responsible for spearheading innovative federal programs and policies such as school choice, charter schools, and alternative routes to teacher certification and school leadership. Before moving to the Education Department, Rees served as Deputy Assistant for Domestic Policy to the Vice President at the White House.

Prior to serving in the executive branch, Rees was the senior education analyst at the Heritage Foundation, where she authored more than two dozen policy briefs and served as the foundation’s chief spokesperson on education. She previously worked at a public interest law firm and an advocacy organization. She began her career in Washington, D.C., on Capitol Hill, where she worked for then-Congressman Porter Goss (R-FL) in 1991.

Rees has appeared on various news outlets including Bloomberg, CNBC, C-SPAN and PBS’s NewsHour. Her articles and opinions have been published in the New York Times, The Wall Street Journal and The Washington Post. She also writes a regular column for U.S. News & World Report.

Rees serves on the advisory committee of the Program on Education Policy and Governance at Harvard University’s John F. Kennedy School of Government and the national advisory board of the National Association of Charter School Authorizers. She has also served as a fellow in the Pahara-Aspen Education program.

Rees holds a Bachelor of Science in psychology from Virginia Tech and a Master of Arts in international transactions from George Mason University. She lives in McLean, Virginia, with her husband and daughter.