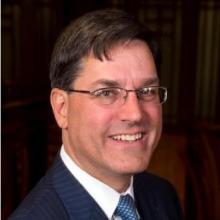 Paul also has broad experience in public service, including as Counselor to the Administrator in the Office of Information and Regulatory Affairs, Office of Management and Budget (2001-2006), where he helped to lead the development of regulatory policy and White House review of regulations in the Administration of George W. Bush. He previously served as Senior Counsel to the U.S. Senate Committee on Governmental Affairs under Chairmen Fred Thompson, Ted Stevens and Bill Roth (1995-2001), where his work focused on reforming the regulatory process. He also has been a lawyer in private practice, most recently as a partner with C&M Capitolink LLC, as well as counsel in Crowell & Moring’s Environment and Natural Resources Group.

Paul currently serves as the Co-Chair of the Legislation Committee in the American Bar Association’s Section of Administrative Law and Regulatory Practice, and recently co¬authored a chapter, “Beyond Process Excellence: Enhancing Societal Well-Being,” published in a book by Brookings Institution Press entitled, “Achieving Regulatory Excellence.” In the spring of 2016, he also served as a Policy Fellow at the University of Pennsylvania Law School, where he offered lectures in environmental law, advanced regulatory policy, legislation, and administrative law.

Paul is a graduate of The Georgetown University Law Center, where he was a John M. Olin fellow in law and economics and an editor on the law journal, and Williams College, where he was a member of Phi Beta Kappa.