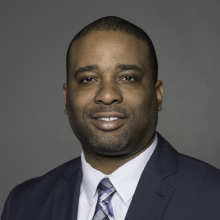 General Manager of the Department of Neighborhoods, City of Detroit

Raymond Solomon II is a native of Detroit, who has demonstrated his love and dedication through his work with the City of Detroit.  For more than 13 years, he has worked to improve the quality of life of Detroiters. He started his career with the City of Detroit in the Mayor’s Office of Community Affairs.  Under Mayor Mike Duggan, he has served as the District 3 deputy manager with the Department of Neighborhoods.  He was promoted to the District 7 manager and now serves as the department’s general manager.

During his career with the City, Ray has served as the chair of Angels’ Night, the City’s anti-arson campaign. He also chaired Motor City Makeover, a community effort to engage Detroit residents in cleaning neighborhoods block by block.

Ray, the son of a community activist, is all too familiar with what it takes to serve and maintain a relationship with the community.  As a child, Ray spent time in the community, passing out literature, sitting in on meetings with various block clubs, neighborhood groups and associations.

A graduate of Frank Cody High School in Detroit, Ray attended Lewis College of Business after high school.  During his college studies, he joined his father’s company, Solomon Distribution. He has worked on several victorious campaigns for a number of judges, Detroit mayors, Southfield, Michigan mayors, Wayne County Commissioners and two presidential candidates.

Ray believes that anything is possible and that doing amazing work is equivalent to magic.