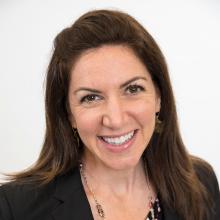 Rebecca Freyvogel Mousseau is executive director of corporate relations at the U.S. Chamber of Commerce Foundation. Rebecca is responsible for corporate development and donor relations. She helps companies identify how the Foundation can support their corporate citizenship and sustainability initiatives and introduces companies to programs and partnership opportunities.

Rebecca has been with the Chamber Foundation since 2004. As part of her role, Rebecca spearheaded the health and wellness initiative amongst other active programs and co-develops collective action opportunities. She served on the Nonprofit Conference on Fundraising Development Committee from 2009 – 2011, which seeks to build the capacity of nonprofits hosted by Booz Allen Hamilton, a CCC partner company. She also served as a judge for the Points of Light Institute Corporate Engagement Award of Excellence from 2007 – 2011.

Rebecca is an active member and volunteer through the Order of Malta (Pittsburgh Region), the St. Lucy’s Auxiliary, and her local school district. She is the Chair of the Young Members’ Committee for the Rolling Rock Club in Pittsburgh. In addition, she chaired the Fly Away Bash for several years to support nonprofits such as Big Brothers and Big Sisters and The Community Food Bank of Pittsburgh. She also served as the Chair of the U.S. Chamber's Employee Communications Committee from 2007 – 2009 and has been an active member since 2004. She served on the Board of Directors of the John Paul II Fellowship, where they opened Trinity House Café in the D.C. metro area. In addition, she was on the Board of Governors at The Catholic University of America.

Prior to joining the Chamber Foundation, Rebecca supported various initiatives in Washington, D.C., including the White House Office of Faith Based and Community Initiatives' 2004 Conference and the Republican National Committee's "Catholics for Bush Campaign." Rebecca has worked as a fellow at the Heritage Foundation, where she served under the vice president of external relations, and at The Becket Fund, a non-profit law firm. Rebecca was also a member of the President's Society at The Catholic University of America.

Rebecca resides in Pittsburgh, PA with her husband, Derek, and their children, Meredith, Laura, Cecilia and Thomas.