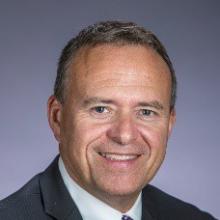 Mr. Stagnolia provides statewide leadership for Kentucky’s adult education system.  He recently led an initiative to rebrand the system as Kentucky Skills U (KYSU).  KYSU offers services in 120 counties, supported by over 500 adult educators, 20 central office staff, and an annual budget of $25 million in state and federal funding. Kentucky has an average enrollment of nearly 25,000 students over the last five years.  Since 2000, nearly 165,000 Kentuckians have earned a GED® and 25,000 of those graduates have transitioned to postsecondary education. Over this same period Kentucky’s working age population without a high school diploma/GED® has declined by 35%, the 4th best decrease in the nation.

Elected by his peers, Reecie is currently serving his 2nd term as Chair of the National Association State Directors of Adult Education (NASDAE).  Additionally, he has been elected to four, two-year terms on the executive committee and has served on the organization’s policy committee since 2002.

Mr. Stagnolia serves as a board member for the Coalition on Adult Basic Education (COABE).  He also serves on the Advisory Board of the National Career Pathways Network (NCPN) and as Chair of their Adult Education Committee.

Mr. Stagnolia serves as a member of the Bluegrass State Skills Corporation (BSSC) Board of Directors, as proxy for the president of the Council on Postsecondary Education. He is a member of the Office of Career Technical and Adult Education (OCTAE’s) Technical Work Group (TWG) for the National Reporting Systems (NRS).