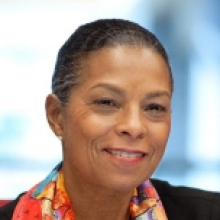 Risa Lavizzo-Mourey, MD, MBA, is president and CEO of the Robert Wood Johnson Foundation, a position she has held since 2003. With more than 30 years of personal experience as a medical practitioner, policymaker, professor, and nonprofit executive, Lavizzo-Mourey combines the scientific and ethical values she learned as a doctor with an enduring conviction that meaningful philanthropy must achieve lasting social change. Under her leadership, the Robert Wood Johnson Foundation has researched, evaluated, and implemented transformative programs tackling the nation’s most pressing health issues, with the goal of building a national Culture of Health.

Convinced that in America good health should be a fundamental expectation enjoyed by all and not an accident of geography or socioeconomic status, Lavizzo-Mourey has built on the Foundation’s 40-year history of addressing key public health issues, such as establishing the 911 EMS system, reducing tobacco use, and focusing on end-of-life care by adopting bold, forward-looking priorities that include:

A specialist in geriatrics, Lavizzo-Mourey came to the Foundation from the University of Pennsylvania, where she served as the Sylvan Eisman Professor of Medicine and Health Care Systems. She also directed Penn’s Institute on Aging and was chief of geriatric medicine at the University of Pennsylvania’s School of Medicine. She was known for making house calls and creating caregiving teams with other specialists and nurse practitioners to better serve her patients.

At the federal level, Lavizzo-Mourey served as deputy administrator of what is now the Agency for Health Care Research and Quality and worked on the White House Health Care Reform Task Force, co-chairing the working group on quality of care. She also has served on numerous federal advisory committees, including the Task Force on Aging Research, the National Committee for Vital and Health Statistics, and the President’s Advisory Commission on Consumer Protection and Quality in the Health Care Industry. Additionally, she co-chaired a congressionally requested Institute of Medicine study on racial and ethnic disparities on health care.

Raised in Seattle by parents who both were practicing physicians, Lavizzo-Mourey knew she wanted to be a doctor since she was a girl. She did her undergraduate work at the University of Washington and the State University of New York at Stony Brook and earned her medical degree from Harvard Medical School. Lavizzo-Mourey completed her residency in internal medicine at Brigham and Women’s Hospital in Boston and was a Robert Wood Johnson Clinical Scholar at the University of Pennsylvania. She trained in geriatrics at Penn, then earned an MBA from the Wharton School.

Lavizzo-Mourey is a member of the Institute of Medicine of the National Academies, the American Academy of Arts and Sciences, and the President’s Council for Fitness, Sports and Nutrition. Over the years Lavizzo-Mourey has served on many corporate and nonprofit boards including: The Independent Sector, Princeton Medical Center, Ascension Health System, Beckman Coulter, Inc., and Genworth Financial. She currently serves on the Smithsonian Institution Board of Regents and several other boards of directors, including Living Cities and Hess. She is the author of several books and dozens of articles. Lavizzo-Mourey is the recipient of numerous honorary doctorates and other awards, including commendations for her work from the Harvard School of Public Health, U.S. Department of Health and Human Services, American College of Physicians, National Library of Medicine, American Medical Women’s Association, National Medical Association, and the University of Pennsylvania.

She and her husband of 40 years, Robert Lavizzo-Mourey, PhD, have two adult children and one grandchild.