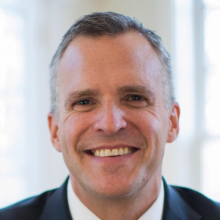 Former U.S. Ambassador to Denmark, and Senior Advisor, Out Leadership

He is currently focused on promoting civic engagement, particularly among youth, supporting Democratic candidates across the country, and issue areas ranging from U.S. public diplomacy to renewable energy.

From 2017 to 2018, Rufus was a Democratic candidate for Congress in Massachusetts’ 3rd District. His campaign focused on restoring trust between people and government and standing for something aspirational and positive, instead of solely against the Trump presidency. He also led a campaign fellowship program, training nearly 200 young people in community organizing.

From 2013 to 2017, Rufus served as the U.S. Ambassador to Denmark where he led efforts to address the effects of climate change, build international coalitions, and invest in clean energy. Rufus also helped modernize the transatlantic relationship through people-to-people diplomacy, youth engagement, and a never-before-seen public diplomacy strategy, which included the award-winning documentary series “I Am the Ambassador.” He was awarded the Grand Cross of the Order of the Dannebrog by Her Majesty Queen Margrethe II of Denmark for his meritorious service.

His pioneering tenure as Ambassador has been profiled in the Wall Street Journal, the Atlantic, CNN, and Vice News, among many other national and international outlets, and he has spoken extensively across Europe and the United States about his efforts to break down walls and humanize the work of government.

At home, Rufus was the National Finance Director for President Barack Obama’s 2012 re-election campaign, responsible for the record-breaking $1 billion budget. During Obama’s first term, Rufus was the National Finance Director at the Democratic National Committee and supported passage of a number of Obama policy initiatives. Before that, he was an aide on Obama’s historic 2008 presidential campaign.

An openly gay man, Rufus has been a longtime advocate for LGBT rights, and commentators have referred to him as Barack Obama's informal "ambassador to the gay community."

Rufus started in Democratic politics as a volunteer and then a staff member on John Kerry’s 2004 presidential campaign. He subsequently started his own consulting business, advocating for progressive causes and advising Democratic candidates across the country. He began his career as a producer in the entertainment industry.

He currently sits on several political boards including “Priorities USA” and “Run for Something”.

A native of Massachusetts, Rufus holds a bachelor’s degree from Brown University. He is married to veterinarian Dr. Stephen DeVincent and they live in Concord, Massachusetts with their Golden Retrievers, Argos and Svend.