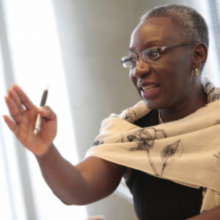 Sandra Pepera is a career diplomat and international development professional. Before joining NDI as its director for Gender, Women and Democracy in 2014, she spent thirteen years as a senior officer at the UK’s Department for International Development (DFID), including leading programs in the Caribbean, Rwanda-Burundi and Sudan. Prior to joining DFID, Sandra spent time in British domestic politics; lecturing in political science and international relations at the University of Ghana; and as a political analyst in the Political Affairs Division at the Commonwealth Secretariat. She has a portfolio of skills and experience which include strategy development, political and risk analysis, diplomacy, general management and corporate governance.

Much of Sandra’s career has been spent working in or on transitional economies, focusing on the building of resilient and inclusive institutions. She led work on women and politics at the University of Ghana and in outreach public policy during the period of intense and unstable political transition in the early 1990s. This included participating in a program that supported the ANC Women’s League during South Africa’s transition from apartheid to majority democratic rule in 1993.

Sandra is a member of the Cambridge Sustainability Leaders Network, the Royal Commonwealth Society, the Global Board Ready Women initiative, and the International Advisory Board of the Commonwealth Journal for International Affairs (the Round Table). She holds the Financial Times Diploma for Non-Executive Directors, and serves as a trustee for the pension fund of an intergovernmental organization.