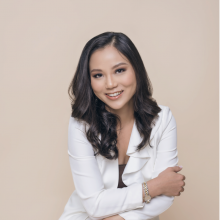 Known to be a sharp operational executor, Sarah's leadership experience spans across venture capital and innovation. From being the youngest CEO within global franchise MRINetwork and later pioneering a corporate venture capital unit within $13Bn Asian conglomerate, Sime Darby, Sarah has been at the forefront of multi-million cross-border investments, including a $30Mn deal which signing was witnessed by former President Obama. She was integral in the structuring and execution of commercialization plans for her portfolio companies, including securing a $10Mn government grant, project financing and market opportunities across Southeast Asia. Today, she is the Chief Strategy Officer of US- based tech startup, Bloxed, delivering trust, security and productivity via the email by integrating blockchain.

On a mission to see more women in the frontline, she is also Co-Founder of The Billion Dollar Fund for Women, a consortium of venture funds mobilizing $1Bn to women-founded companies. She sits on multiple boards including BEACON DC, a partnership between Washington DC Mayor’s office, Google and Georgetown University, and Lean In Malaysia, which she co-founded, a non-profit platform recognized as the voice of credibility for women issues in Malaysia. In 2016, she was appointed by Sheryl Sandberg (COO, Facebook) as Regional Leader, championing the “Lean In” movement in Asia with a reach beyond 300,000. Named “Prestige Top 40 Under 40”, she is a recognized speaker and commentator on the role of women, venture capital and innovation, having been featured amongst others on Forbes, Der Spiegel and the Wall Street Journal.

More about her work on: www.scsarahchen.com/ @scsarahchen on all social media handles