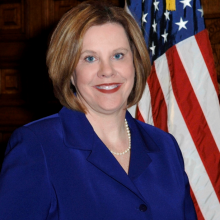 District 45, Georgia State Senate
Senator Renee Unterman, throughout her service of 23 years as a public servant on the local and state government level, she has focused on health and social law, consumer issues, and has given special attention to the young and vulnerable, as well as the elderly citizens of Georgia. With each legislative session, Sen. Unterman has championed legislation that has sought to end the sexual exploitation of minors. She continues to fight for a change in Georgia law that will view those children forced into prostitution as the victim and not a criminal.
Also an advocate of public health, Senator Unterman has twice been named a “Public Health Hero” by the Georgia Public Health Association (GPHA). Senator Unterman was also named Legislator of the year by the Georgia Public Health Association in 2013. She has been a devoted contributor to the Aging Services of Georgia which is a statewide association that represents numerous non-profit organizations. Senator Unterman assists this group as they seek to provide quality housing, health care, and community based services that many Georgians depend on in the latter stages of their lives. Over the past several years, Sen. Unterman has lead a concerted effort to reduce metal theft in Georgia, and has worked to support the adoption of several pieces of anti-metal theft legislation, including SB321, SB203 and SB82. With the establishment of her two private charitable organizations, Friends of Gwinnett County Senior Services and Aid Gwinnett, she remains committed to serving the needs of senior citizens and those families and individuals who are affected by the AIDS virus.
Senator Unterman grew up in Gwinnett County and graduated from Berkmar High School. She earned her Nursing Degree at Georgia State University and trained at Grady Memorial Hospital in Atlanta. Her undergraduate degree is from the University of Georgia, as a clinically trained social worker. After graduation, she worked as an emergency room and critical care nurse. She currently works on national health care policy for Amerigroup Georgia.
After serving three terms as the Mayor of Loganville, Georgia, she then went on to serve four years as a Gwinnett County Commissioner. She served as Chairman of the National Association of State Legislature’s Committee on Human Welfare, and as Honorary Chairman on the Hunger Initiative.
Senator Unterman has always demonstrated strong pro-life, conservative family values. Senator Unterman now serves as Chairman of the Health and Human Services Committee and Vice Chairman of Appropriations. She also serves on the Finance, Regulated Industries and Utilities, Insurance and Labor and Rules Committees. She received the 1849 Friend of Medicine Award from the Medical Association of Georgia for her leadership of the Senate Health and Human Services Committee, as well as her support of Georgia’s medical personnel and work to improve safety and licensing regulations. Senator Unterman continues to serve her community as the chair of the Lake Lanier Caucus. She represents the 45th Senate District, which include portions of Gwinnett County.
She is a native Georgian and has lived in Gwinnett for many years, currently residing in Buford with her husband Phil.