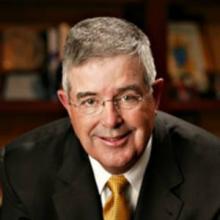 Stanley Hupfeld became President and Chief Executive Officer of the Oklahoma Healthcare Corporation and its subsidiaries, including Baptist Medical Center of Oklahoma, on March 10, 1987. In 1995 Hupfeld led the merger of Baptist Medical Center, Southwest Medical Center, and Baptist Healthcare of Oklahoma. Annual net revenues of the System are well over $1.6 billion with 1,800+ beds. After 23 years as President and Chief Executive Officer of INTEGRIS Health he transitioned effective January 1, 2010 to Chairman of the INTEGRIS Family Foundations. Prior to his career with INTEGRIS Health, Mr. Hupfeld served as President of All Saints Healthcare in Fort Worth, Texas for ten years. He served in the U.S. Army in Vietnam from 1968 to 1970.

He has served as a trustee on the national VHA and AHA Board of Directors, and serves on numerous other Boards and commissions in Oklahoma. He has an extensive speaking background, and has been widely published. He was honored in 2007 with one of the American Hospital Association's highest honors, the award of Honor, and is also the recipient of the Friends of Nursing Award from the Oklahoma Nurses Association, the CEO Marketer of the Year award from the American Society for Healthcare Planning and Marketing, and the Executive of the Year award from the Sales & Marketing Executives International.

As the driving force of the nation's first hospital-sponsored charter school, Hupfeld was honored in 2009 when the INTEGRIS Health Board Directors voted to rename the school The Stanley Hupfeld Academy at Western Village. He currently writes a healthcare column for a local business daily, The Journal Record, and published his first book, "Political Malpractice – How the Politicians Made a mess of Health Reform," in 2012.