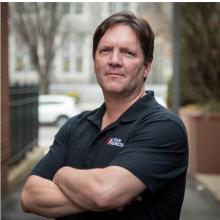 Interim Chief Executive Officer, Team Rubicon Global
Dr. Stephen Hunt became interim CEO of Team Rubicon Global in November 2017. Based between Washington DC and Boston, Stephen has  been a leading proponent of Team Rubicon's humanitarian work since first learning of our volunteers on their relief operation in Pakistan in 2010. Stephen is leading TRG to deliver on its mission to support the Team Rubicon Network by fostering the establishment and development of Team Rubicon country units and by facilitating effective humanitarian aid in the
wake of disasters and, in so doing, helping veterans find purpose and community. The Team Rubicon network of charities are based in Australia, Canada, Norway, United Kingdom, and United States.
Prior to his current role at Team Rubicon Global, Stephen was responsible for the vision and implementation of Team Rubicon's evolving technical capabilities at the USA head­ quarters in Los Angeles, California. Stephen served as the CIO/CTO for both Team Rubicon Global and Team Rubicon USA. Working with our founders & partners, Stephen is recognized for defining the organization as a Digital NGO.
Prior to his time at Team Rubicon, Stephen spent many years in roles that included scientist, engineer, infantryman, manager, and construction worker. He has degrees in Physics (B.S.), Astronomy (M.A.) and a PhD in Electrical Engineering. Stephen was a paratrooper with the 82nd Airborne and a reservist, and he spent 25 years at MIT Lincoln Laboratory working in support of US national interests. He has extensive experience in systems engineering & analysis, program management, operations, and technical R&D. Stephen was lured from the laboratory back to a life closer to the ground where he could apply both his engineering and field skills to help people in need. He has supported disaster response and humanitarian work across the globe for over 15 years.