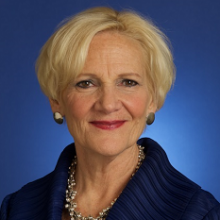 President, Chamberlain College of Nursing
Dr. Susan Groenwald was appointed President of Chamberlain College of Nursing in 2006. She is responsible for managing all undergraduate and graduate nursing programs, which includes 20 physical campuses, as well as online programs.
Before joining DeVry Group, Dr. Groenwald served as Director of Operations for Focused Health Solutions, Inc., developing clinical programs and managing a team of nurses who provided disease management services for large self-insured employers. Before that, she founded a commercial barter company, served as Clinical Nurse Specialist and Director of the oncology nursing graduate program at Rush University, and Senior Program Director at the Illinois Cancer Council's Comprehensive Cancer Care Center.
Dr. Groenwald’s accomplishments as a leader were recognized in 1999 when she was named National Businesswoman of the Year by the Chicago Chapter of the National Association of Women Business Owners and received a Blue Chip Enterprise Award from the U.S. Chamber of Commerce and Massachusetts Mutual. Dr. Groenwald is the author of numerous articles and has edited five textbooks on cancer nursing, one of which – “Cancer Nursing: Principles and Practice” – won the American Journal of Nursing Book Award. Dr. Groenwald’s work in oncology and nursing education was recognized by her induction in 2014 as a fellow of both the American Academy of Nursing and National League for Nursing’s Academy of Nursing Education.
She holds bachelor’s and master’s degrees in nursing from Rush University. She also holds a Doctor of Philosophy in higher education leadership from Capella University.