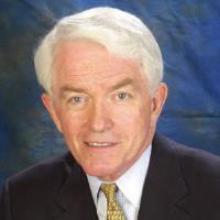 Center for Education and Workforce
President and CEO, U.S. Chamber of Commerce

Thomas J. Donohue is president and CEO of the U.S. Chamber of Commerce. Since assuming his position in 1997, Donohue has built the Chamber into a lobbying and political powerhouse with expanded influence across the globe.

During Donohue’s tenure, the Chamber’s lobbyists, policy experts, and communicators have helped secure many legislative victories, including major tax cuts, more sensible workplace and environmental regulations, and increased funding for transportation. On the international front, the Chamber has become a leader in knocking down trade barriers, winning new free and fair trade agreements, and fighting isolationism at home and abroad.

Under Donohue’s leadership, the Chamber has emerged as a major political force by educating the public about the business records of congressional candidates and generating voter enthusiasm through the Chamber’s powerful grassroots program.

Donohue established the U.S. Chamber Institute for Legal Reform, which has won significant legal reforms in the courts, at the state and federal levels, and in elections for state attorneys general and Supreme Court judges.

The National Chamber Litigation Center, the Chamber’s law firm, has become more aggressive in challenging anti-business measures in court. In 2010, NCLC filed as a party or intervenor in 17 cases and 90 times as a friend of the court. The National Chamber Foundation, the Chamber’s public policy think tank, drives the policy debate on key topics and provides a forum where leaders advance cutting-edge issues facing the U.S. business community.

Donohue has also launched a number of multimillion-dollar initiatives around several key issues, including a national energy strategy, stronger capital markets, and protection of intellectual property.
Previously, Donohue served for 13 years as president and chief executive officer of the American Trucking Associations, the national organization of the trucking industry.

Donohue serves on two corporate boards of directors—Union Pacific Corporation and Sunrise Senior Living Corporation. He is president of the Center for International Private Enterprise, a program of the National Endowment for Democracy dedicated to the development of market-oriented institutions around the world.

Born in New York City in 1938, Donohue earned a bachelor’s degree from St. John’s University and a master’s degree in business administration from Adelphi University. He holds honorary doctorate degrees from Adelphi, St. John’s, and Marymount universities. Donohue and his wife, Liz, live in Potomac, Maryland. They have three sons and five grandchildren.