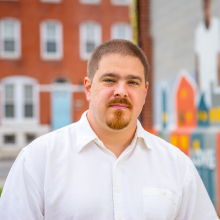 A native of New Jersey, Todd Marcus has lived and worked in Baltimore’s Sandtown-Winchester community since 1997 where he has focused on his community work and music.

Marcus is currently the Executive Director of Intersection of Change, a nonprofit he helped build with C.W. and Amelia Harris to address poverty related issues in the community.

The organization operates three programs that include Jubilee Arts, a community arts program for children & adults; Martha’s Place, a recovery program for women overcoming drug addiction; and Strength to Love II, an urban farm that offers employment to ex-offenders and which addresses food apartheid in the community.

Intersection of Change’s work has resulted in significant neighborhood revitalization of the 1900 and 2000 blocks of Pennsylvania Avenue through the full renovation of six previously vacant and dilapidated buildings, transformation of 18 vacant lots into community green spaces and meditative gardens, creation of two dozen neighborhood murals, and conversion of 1.5 acres of vacant lots into an urban farm.

As a musician, Marcus is a bass clarinetist, composer, and bandleader of which the New York Times writes, “Mr. Marcus is probably the most inventive bass clarinetist working in straight-ahead jazz today…[and] lives in Baltimore, where he is a guiding light on the city’s jazz scene who doubles as an activist and organizer.”  He performs nationally and internationally and his work over recent years has increasingly explored the Middle-Eastern sounds from his Egyptian-American heritage.

Washington, DC
November 13 (All day) to November 14 (All day)
This form needs Javascript to display, which your browser doesn't support. Sign up here instead