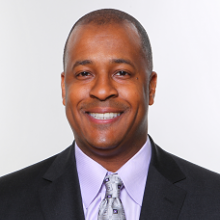 Senior Vice President Tony Wyllie enters his eighth season with the Redskins in 2016 in the midst of his third decade of NFL service as a decorated communications professional.

He serves as an advisor to the principal owner on all issues related to public perception of the franchise. He shapes and molds the team image through all public contacts and publicity generation, serves as liaison between team and local and national media, oversees coordination of all interviews and serves as team spokesman.

Wyllie and his staffs have earned the Pete Rozelle Award, presented annually by Pro Football Writers of America to the best NFL public relations staff, a record five times during his career. He is the only executive in the NFL to have won the award with three different teams.

He has previously worked as an Assistant Director of Public Relations for the Los Angeles/St. Louis Rams (1994-98), the Director of Public Relations for the Tennessee Titans (1998-2000), and Vice President of Communications for the Houston Texans (2000-10). During his career, he helped guide the Rams franchise through their 1995 transition from Los Angeles to St. Louis and assisted with the relocation and renaming of the Tennessee Titans. He was one of the first hires of the expansion Texans in 2000, helping to build the new franchise’s image even during the two years prior to the team’s first game in 2002.

The Brooklyn native began his NFL career as a game day intern with the Houston Oilers in 1991 before working as a summer intern with the San Diego Chargers PR department in 1992. He spent 1993 as an intern in the PR department with the Dallas Cowboys. Wyllie has helped promote 12 Pro Football Hall of Famers in his career.

Wyllie worked three years in the sports information department of Texas Southern University, where he received his degree in journalism. Wyllie received TSU’s “Distinguished Alumnus” award in 2004, and in December 2013, delivered a commencement address at the university. He also earned an MBA from the Jones School of Business at Rice University. In 2015, Wyllie was honored with the SWAC Alumni Association Lifetime Achievement Award for his contributions to the Southwestern Athletic Conference’s athletic heritage.

In Houston, Wyllie served on numerous Boards of Directors including the Ensemble Theatre in Houston, the March of Dimes, and the Management Leadership for Tomorrow-Houston, John P. McGovern Museum of Health & Medical Science, the Houston Texans YMCA and the Touchdown Club of Houston. He is currently on the board at County Christian School in Ashburn, Va.

He and his wife, Natasha, are parents of son James Anthony and daughter Toni Simone. The family resides in Northern Virginia.