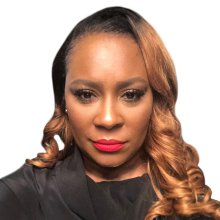 TopekaKSam
The Ladies of Hope Ministries

Topeka K. Sam is the Founder and Executive Director of The Ladies of Hope Ministries – The LOHM and co-founder of HOPE HOUSE NYC. She serves on the board of directors for Grassroots Leadership and is now the first formerly incarcerated person on the board of The Marshall Project. Since her release from Federal Prison in 2015, Topeka has become a Beyond the Bars 2015 Fellow and a 2016 Justice-In-Education Scholar both from Columbia University, a 2017 Soros Justice Advocacy Fellow working on Parole and Probation Accountability Project, a 2018 Unlocked Futures Inaugural Cohort Member, 2018 Opportunity Agenda Communications Institute Fellow, Director of #Dignity Campaign for #cut50, Senior Advisor of New Yorkers United for Justice, Host of “The Topeka K. Sam Show” on SiriusXM UrbanView Channel 126 Sundays 9am est., and has recently signed a development deal as Executive Producer for a scripted and unscripted series inspired by her fight to change the many problems that plague female incarceration with 44 Blue Productions.

Topeka has been featured in Vogue, Essence, SalonTV, Vice, New York Times. She has been featured in Glamour Magazine and Black Enterprise for being “The Black Woman behind the video that led to the Trump Clemency of Alice Johnson.” She has spoken at the 2018 United States of the Woman Conference, 2018 Women in the World Conference, 2018 White House Prison Reform Summit and is a TedxMidAtlantic Superheros Presenter.

She has worked and continues to work selflessly and relentlessly in her fight for the dignity, decriminalization and decarceration of women and girls.