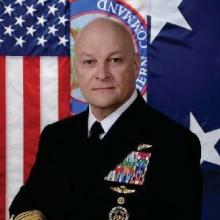 Dumont graduated from the University of Southern Maine and was commissioned a second lieutenant in the U.S. Army. He served five years on active duty as an Army aviator and paratrooper in the 82d Airborne Division, holding positions as a company executive officer, flight platoon leader in the Middle East, and task force executive officer in Central America. Upon leaving the Army in 1990, he affiliated with the U.S. Navy Reserve as a naval aviator.

Dumont has commanded five organizations, including an aviation squadron and the joint reserve unit of the U.S. Military Delegation to the NATO Military Committee in Brussels, Belgium.

In subsequent assignments, Dumont served as special assistant to the Supreme Allied Commander, Europe (SACEUR) and commander, U.S. European Command (USEUCOM); chief of staff, Office of the U.S. Defense Representative to Pakistan; deputy chief of staff for stability operations with the International Security Assistance Force Joint Command in Kabul, Afghanistan; and chief of staff as well as deputy chief of staff for strategy, resources and plans (N5/N8), U.S. Naval Forces Europe and Africa. While assigned to the Joint Staff, he served as J5 deputy director for politico-military affairs; J5 deputy director for strategic initiatives; and as the vice director of the Joint Staff.

In addition to a Bachelor of Arts from the University of Southern Maine, Dumont holds a Juris Doctor from Suffolk University Law School, a Master of Science (M.S.) in Strategic Studies from the U.S. Army War College and an M.S. in National Security Strategy from the National War College.