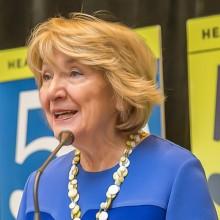 As a seasoned leader in both executive and policy roles, Yasmina Vinci's professional experience and capabilities have delivered improvements in the lives of children at the national, state, and local levels. She is now Executive Director of the National Head Start Association (NHSA). Yasmina came to the National Head Start Association after several years as principal and founder of EDGE Consulting Partners. At EDGE, Yasmina pursued local, national and global projects that utilized the knowledge, experience, and connections of her years in human services and early education, to enhance the capacity of organizations to thrive as competent, strategic entities capable of influencing policy. Yasmina founded EDGE after receiving her Master in Public Administration degree from Harvard's Kennedy School of Government.

Yasmina brought to her NHSA role over ten years of executive director experience at another national organization. As the first Executive Director of the National Association of Child Care Resource & Referral Agencies (now Child Care Aware America) she led NACCRRA's transition from an all-volunteer association of fewer than 200 child care resource and referral agencies to a powerful national network of 860+ community-based organizations. In this role, she worked with affiliate organizations, other national advocacy and research organizations, the press, federal and state governments, and the US Congress to implement NACCRRA's system-building public policy agenda on early care and education. Under her leadership, NACCRRA organized the national grassroots campaign that was instrumental to securing the funding for child care in the welfare reform legislation.

Yasmina’s portfolio of experience is grounded in service as executive director of an early care and education program serving low-income families and as development director for a cluster of non-profit child care centers. In State government, she had the opportunity to supervise Head Start research, administer the federal Dependent Care Grant and plan for New Jersey’s implementation of the very first Child Care and Development Block Grant.

Yasmina currently serves on numerous advisory boards and is a member of the International Organizing Committee for the World Forum on Early Care and Education.