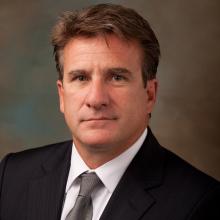 A 32-year veteran of the energy and environmental industries, including 20 years in the nuclear industry, William J. “Bill” DiCroce was appointed president and CEO of Veolia North America in February 2016.  He leads the water, energy, waste and resource recovery activities of Veolia’s North American zone, which has approximately 7,800 employees. Veolia is the global leader in environmental solutions and optimized resource management.

Before joining Veolia, DiCroce was president and chief operating officer of NSTAR Electric and Gas Company's unregulated subsidiaries, which owned and operated district energy and telecommunications businesses and private utilities in the greater Boston area. Prior to that, DiCroce held operational and executive positions with Entergy Nuclear and Boston Edison. He began his career with General Electric at the Knolls Atomic Power Laboratory, where he was certified as a nuclear power engineer within the U.S. Naval Nuclear Propulsion program.

DiCroce earned a bachelor's degree in marine engineering at the Massachusetts Maritime Academy and an M.B.A. at Boston University.  At the Massachusetts Maritime Academy, he served as an adjunct professor for nuclear power technology. He serves on various boards of directors including the International District Energy Association (IDEA), the Advanced Energy Economy, and the Northeast Clean Energy Council.