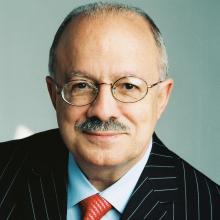 An American by choice, Eduardo Padrón arrived in the United States as a refugee at the age of 15. Since 1995, he has served as President of Miami Dade College (MDC), the largest institution of higher education in America with more than 165,000 students. He is credited with elevating MDC into a position of national prominence among the best and most recognized U.S. colleges and universities. An economist by training, Dr. Padrón earned his Ph.D. from the University of Florida. In 2009, TIME magazine included him on the list of "The 10 Best College Presidents." In 2010, Florida Trend magazine placed him on the cover of its inaugural "Floridian of the Year" issue. In 2011, The Washington Post named him one of the eight most influential college presidents in the U.S. Also in 2011, he was awarded the prestigious 2011 Carnegie Corporation Centennial Academic Leadership Award. In 2012, he received the Citizen Service Award from Voices for National Service, the coveted TIAA-CREF Hesburgh Award for Leadership Excellence, and the Aspen Institute Ascend Fellowship. In 2015, he was inducted into the U.S. News & World Report STEM Hall of Fame. Dr. Padrón's energetic leadership extends to many of the nation's leading organizations. He is the past chair of the board of directors of the American Council on Education (ACE) and is a past chair of the board of the Association of American Colleges and Universities (AAC&U). He also served on the American Academy of Arts & Sciences' Commission on the Humanities & Social Sciences.

President Padrón is widely recognized as one of the top educational leaders in the world and is often invited to participate in educational policy forums in the United States and abroad. In 1993, President Bill Clinton recognized him as one of America's foremost educators. President George W. Bush nominated him to the National Institute for Literacy Advisory Board and the National Economic Summit. More recently, he represented the U.S. at UNESCO's World Conference on Higher Education at the invitation of the Obama administration, and President Obama appointed him Chairman of the White House Commission on Educational Excellence for Hispanic Americans. During his career, he has been selected to serve on posts of national prominence by six American presidents.

Internationally, President Padrón's accomplishments have been recognized by numerous nations and organizations including the Republic of France, which named him Commandeur in the Ordre des Palmes Académiques; the Republic of Argentina, which awarded him the Order of San Martin; and Spain's King Juan Carlos II, who bestowed upon him the Order of Queen Isabella, and Spain's Prince and Princess of Asturias, Felipe and Letizia, who presented him with the Juan Ponce de Leon 500th Anniversary award.

Dr. Padrón's pace-setting work at Miami Dade College has been hailed as a model of innovation in higher education. He is credited with engineering a culture of success that has produced impressive results in student access, retention, graduation, and overall achievement. MDC enrolls and graduates more minorities than any other institution in the United States, including the largest numbers of Hispanics and African-Americans. He is nationally respected for his advocacy on behalf of underserved populations in higher education, and his in-depth research report, "A Deficit of Understanding," highlights the funding crisis that threatens access for low-income and minority students. Dr. Padrón has also championed innovative teaching and learning strategies and developed support initiatives to ensure student success. He was a member of the Association of American Colleges and Universities' (AAC&U) Greater Expectations national panel that re-examined baccalaureate education in the U.S. and the Woodrow Wilson Foundation's Commission on the High School Senior Year. More recently he has been called upon to co-chair the Century's Foundation's Task Force on Preventing Community Colleges from Becoming Separate and Unequal. He also serves on the National Commission on Higher Education Attainment; CFR Task Force on U.S. Education Reform and National Security; National Governors Association's Advisory Group for College Completion Initiatives; and ACE Blue Ribbon Panel on Global Engagement.

He currently chairs the board of the Business/Higher Education Forum. He also serves on the boards of the Council on Foreign Relations; RC 2020; White House Fellows Selection Panel (Chair); the International Association of University Presidents; and Achieving the Dream. In past years he has held leadership positions on the boards of the Federal Reserve Board of Atlanta, Miami Branch (past Chair); the Carnegie Foundation for the Advancement of Teaching; Hispanic Association of Colleges & Universities (Chair); the Kennedy Center for the Performing Arts; the White House Commission on Educational Excellence; Campus Compact; Congressional Hispanic Caucus Institute; The College Board; and the White House/Congressional Commission of the National Museum of the American Latino.

He is the recipient of numerous honorary doctorates and prestigious awards. The recent list includes the 2012 Aspen Institute/Ascend Fellowship; 2012 University of Texas "John Roueche International Leadership Award"; 2012 Greater Miami Chamber of Commerce "Sand In My Shoes" Award; "2008 Charles Kennedy Equity Award," Association of Community College Trustees (ACCT); "2008 Reginald Wilson Diversity Leadership Award," American Council on Education; "2008 Innovator of the Year," League for Innovation in the Community College; Chair Academy for Leadership Development's "2005 Paul A. Elsner Award for International Excellence;"Hispanic Magazine's "2004 Hispanic Achievement Award in Education"; and the Association of Community College Trustee's "2002 Chief Executive of the Year" award. He is a prolific writer with countless publications to his credit and serves on the editorial boards of The Presidency, University Business, and Campus Technology.

He has been featured in People magazine as one of the world's most influential Hispanics, in Hispanic magazine's list of most powerful Latinos, and in PODER magazine's report on "Movers and Shakers."