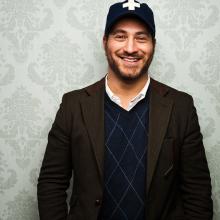 The co-founder and content chief of Not Impossible, and editor-in-chief of www.NotImpossibleNow.com, Elliot has become a recognizable figure in taking stories based in the sphere of science and technology, and ensuring that they are not only accessible, but that they serve to inspire.

By utilizing crowd-sourcing to crowd-solve healthcare issues, Not Impossible aims to provide low-cost and DIY solutions, and to enable high-tech devices to reach people in need all over the world. Not Impossible is disrupting the status quo of accessibility by creating a sustainable cycle where collaboration inspires innovation, and content compels action.

Not Impossible projects include - Project Daniel - 3D Printing Prosthetic Limbs for Children of War Torn Sudan; The Brainwriter - a prototype EEG sensor and eye-tracking device that enables those with ALS and other locked-in syndromes to create and communicate using just brainwaves and eye movements; the Robot Walker - pursuing a right to walk for kids with cerebral palsy; and Don's Voice - utilizing software to give audible speech to those without.

A former M&A/Biotech Venture Capital attorney in Australia and New York, Kotek holds a Law Degree, a BS in Pharmacology & Toxicology, studied at The Lee Strasberg Theatre Institute in New York and completed UCLA’s Professional Program in Screenwriting. He’s the founder and editor-in-chief of Beyond Cinema magazine, the former editor-in-chief of both Moving Pictures and Celebs.com, has written for publications as diverse as The Hollywood Reporter, GQ, Flaunt and Inked, delivers a fortnightly report on ABC Radio Australia to an est. 1 million listeners and has hosted events for Film Independent, SAG, the Writers Guild of America and film festivals globally.  The feature documentary “140", which Kotek co-produced, is the first ever user-generated film made utilizing social-media. ”Little Larry,” which Elliot wrote, received a Directors Guild of Canada nomination; his current productions include the St. Tropez film festival-winning documentary “Queen Mimi” with Zach Galifianakis and “The People Sign,” which highlights the work of music interpreters for the hearing impaired.