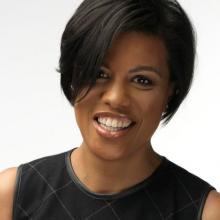 Veteran Democratic political strategist Stephanie Rawlings-Blake served as the 49th Mayor of Baltlimore, MD, the largest independent city in America. She was elected by her peers as the 73rd President of the U.S. Conference of Mayors (USCM) – the first African American woman to hold the post. A long-time active participant in national politics, Rawlings-Blake held the position of Secretary of the Democratic National Committee from 2013- February 2017. She currently runs her own consulting firm, SRB & Associates working with national clients including Hudson News, MasterCard, and Airbnb. Stephanie also serves as a Political Contributor for ABC News.

Rawlings-Blake launched her political career when she became the youngest person ever elected to the Baltimore City Council at the age of 25. She won a citywide election to the position of City Council President, serving from 2007 until early 2010, when she became Mayor.

The hallmarks of Rawlings-Blake’s administration include strong fiscal stewardship, regulatory reform, trusted leadership, smart development, sustainability and enriching programs to improve the lives of residents as well as attract and retain entrepreneurs and national retailers.

Rawlings-Blake created Baltimore’s first long-range financial plan and implemented a bold set of reforms, taking on some of the biggest and most controversial challenges facing America’s urban centers. The plan put Baltimore on track to reduce homeowner property taxes by more than 20% over a 10-year period. Her package of financial reforms led to the city receiving its highest bond ratings in more than 50 years.

In 2015, the City of Baltimore earned the highest national ranking of a 5-Star Community for progress on a range of economic, social and environmental issues.

Recognized as a national leader on sustainability, Rawlings-Blake developed and adopted a number of innovative programs and projects including: The Climate Action Plan, Disaster Preparedness Project and Plan (DP3), Homegrown Baltimore Urban Agriculture Plan, and the Green Pattern Book. The administration also laid the groundwork, and kicked off the Green Network Plan, an initiative aimed at leveraging public and private resources to reclaim and transform vacant and blighted land to create green space.

Under the leadership of Rawlings-Blake, Baltimore increased its Zipcar fleet and electric vehicle charger installations. Most recently, she secured funding for a bike share program and expanded and improved the bike infrastructure citywide.

Baltimore is experiencing a renaissance. This is attributed to Rawlings-Blake focusing on building a diverse group of neighborhoods where young professionals can see their impact on the community. Taking on the challenge of unwanted and aging buildings, she created tax incentives to attract developers to revitalize areas of the city into dynamic mixed-use communities with new residential apartments.

Because of her bold leadership, the crane is no longer extinct in Baltimore. During Mayor Rawlings-Blake's tenure, Baltimore City experienced a renaissance with billions of dollars in new construction activity. Her targeted tax credit to decrease the office vacancy rate has created thousands of new market-rate apartment units have been developed. As a result, Baltimore is the 4th fastest growing, and 8th largest, millennial population in the U.S.  Downtown Baltimore now ranks as the 9th largest residential population with the 12th largest commercial district in the U.S.

With all of this activity, it is no surprise that Under Armour chose to expand its existing world headquarters in Port Covington -- one of the nation's largest urban redevelopment projects.  Mayor Rawlings-Blake and her economic development team shepherded through one of the largest Tax Increment Financing deals in the nation as the project will require more than $535 million in infrastructure improvements. In all, Port Covington is expected to add more than $6 billion in new, vertical construction and create tens of thousands of new jobs over the next two decades.

Rawlings-Blake made history by signing a landmark executive order to protect New Americans from discrimination within Baltimore, as well as increasing access public safety resources and City services for foreign-born residents. She successfully fought for a state-wide ballot initiative known as the “Dream Act”, which provides in-state tuition rates for undocumented immigrant students who attend Maryland high schools.

Rawlings-Blake worked passionately with state leaders to pass Maryland’s Civil Marriage Protection Act which allows same-sex couples to obtain a civil marriage license. When the law took effect on January 1, 2013, she presided over the first samesex marriages in Maryland’s history during a midnight ceremony at Baltimore’s City Hall.

Rawlings-Blake has been honored with numerous awards and accolades. In 2013 she was awarded the First Citizen Award by the Maryland State Senate, a top honor for dedicated and effective participants in the process of making government work for the benefit of all. The Maryland Daily Record selected her as one of “Maryland’s Top 100 Women” in 2007 and again in 2011. The National Congress of Black Women named her a Shirley Chisholm Memorial Award Trailblazer. And the National Association of Negro Business and Professional Women’s Clubs named her one of Baltimore’s “Young Women on the Move.”

Rawlings-Blake earned a Bachelor of Arts degree in Political Science from Oberlin College and her Juris Doctorate from the University of Maryland School of Law. She is a member of the Federal Bar association and the Maryland State Bar Association. She has served on numerous boards including the National Aquarium; Baltimore Convention and Tourism Board; Baltimore Substance Abuse Systems, Inc.; Living Classrooms Foundation; Waterfront Partnership of Baltimore; and Parks and People Foundation. Rawlings-Blake currently lives in Baltimore.