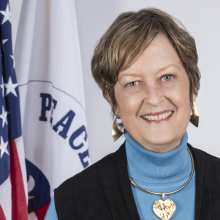 Dr. Josephine (Jody) Olsen, PhD, MSW, was sworn into office as the 20th Director of the Peace Corps in March 2018.

Prior to returning to the Peace Corps in 2018, Dr. Olsen served as Visiting Professor at the University of Maryland-Baltimore School of Social Work and Director of the University’s Center for Global Education Initiatives. In this capacity she developed and directed inter-professional global health projects for students in dentistry, law, medicine, nursing, pharmacy, and social work. She also oversaw health research projects in Malawi while teaching courses on international social work, global social policy, and global women and children’s health. Throughout her career, Dr. Olsen has championed the expansion of service, learning and international opportunities for Americans of all backgrounds.

Washington, DC
November 13 (All day) to November 14 (All day)
This form needs Javascript to display, which your browser doesn't support. Sign up here instead