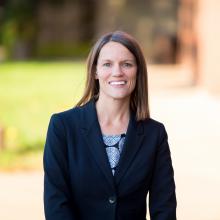 Nicole Crain is Executive Vice President, for the Iowa Association of Business and Industry. She is recognized as one of Iowa's most effective lobbyists by her peers, lawmakers and ABI members. Her experience on both the federal and state level gives her a unique perspective in navigating the bureaucracies that ABI members face daily.

Nicole had previously been employed with ABI as Director, Government Relations. During that time and now, she is engaged in working on members' behalf on tough employment, environmental, and economic growth issues. She leads ABI's policy work in a number of areas, including administering ABI's Iowa Industry Political Action Committee.

Before returning to ABI in 2012, Nicole was President of the Iowa Taxpayers Association, a statewide business tax policy organization. She has also served as Director of Government Affairs for the Associated Builders and Contractors of Iowa, where she worked closely with the national association to activate Iowans in the fight to defend Iowa's Right to Work law.

Nicole is a native of Blockton. She continues to be involved with her alma mater and serves on the Board of Trustees and is a member of the Presidents’ Society. She lives in Windsor Heights with her family where she is active as a volunteer and civic leader.