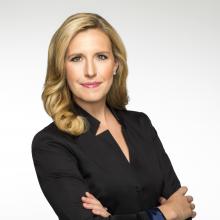 Poppy Harlow is the anchor of CNN Newsroom Weekend on Saturdays from 3-6pm ET and 7-8pm ET, and Sundays from 5-8pm ET.

Based in New York City, Harlow is also a correspondent for CNN covering breaking news, as well as reporting features and investigative stories. Her recent reporting on the General Motors recall crisis -- specifically the story of one woman wrongly convicted in a deadly crash -- aired across CNN prime time programming and CNNMoney.com.

Previously, she was the anchor for CNNMoney.com, serving as the primary host for the site's video network, as well as a business correspondent on CNN, CNN International and HLN, covering business and economic news and how it impacts policy and people around the globe. She interviews prominent business leaders, policymakers, small business owners and consumers on a wide range of topics.

Harlow's reporting has won numerous industry awards, including the Gracie Award for Best online investigative feature on financial fraud, and SABEW's Best in Business award for online video. She is a regular speaker at industry events, donates her time to developing emerging high school and collegiate journalists, and works as a mentor through the Boys & Girls Club.

New York, NY
March 4 - 1:00 pm to March 5 - 6:00 pm
This form needs Javascript to display, which your browser doesn't support. Sign up here instead