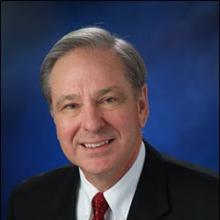 Rob grew up on a farm near Homestead, Iowa, south of the Amana Colonies, and graduated from high school in Marengo, Iowa. The first native-born Iowan to be President of DMACC, Rob has a B.S. in Political Science and Economics and a M.S. in Higher Education Administration from Iowa State University. He worked for Iowa State as an Assistant Dean for three years before moving to Florida to serve as an Assistant Dean of Students.

Rob graduated from Law School at the University of Florida in 1979 and was an Associate University Attorney for three years before operating his own law practice for 16 years. He is a board-certified civil trial lawyer. In 1996, he became Assistant to the President and Dean for Institutional Advancement at Santa Fe Community College in Gainesville, Florida.

In 1998, Rob returned to Iowa as President of Northeast Iowa Community College in Calmar, Iowa. Rob loves his job at DMACC and is active on a number of community boards, including three years on the United Way of Central Iowa Board.

In addition to his DMACC position, he serves on the National Board of Gateway to College, a drop-out recovery program; the Governor’s STEM Advisory Council and Executive Committee; the National STEMconnector Innovation Task Force, and the Food and Ag Council; and, the National Leadership Council of Opportunity Nation. He also chairs the National STEMconnector Higher Education Council and serves on the boards of Iowa Student Loan Liquidity, the Iowa Ag. Literacy Foundation, the Technology Association of Iowa, the Iowa Quality Center, the Agri-Business Association of Iowa, the Iowa Direct Caregivers Association, the Iowa Rural Development Council, the Greater Des Moines Partnership, the Iowa Innovation Council, and the Iowa Economic Development Authority.

Rob and his wife, Pat, have two children and five grandchildren.