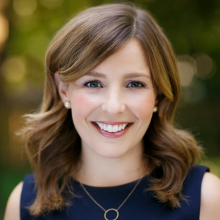 Sara Steele is the Lead Manager, Sustainability at the The Dow Chemical Company.  In this role, she supports both the federal government affairs team and the public affairs corporate media relations team.  Sara’s policy work focuses on issues of importance to the Company such as trade, tax and chemical regulation, as well as Dow's sustainability priorities.   In her corporate media role, Sara serves as the strategic communications and planning lead for sustainability, corporate citizenship and public policy-related issues.  In addition, Sara co-leads one of the seven Dow 2025 Sustainability Goals, “Leading the Blueprint” on behalf of the government affairs teams.

In 2013, Sara joined Dow, based in the Washington, D.C. office.  Previously, Sara served as a Senior Advisor for the Task Force for Business and Stability Operations within the U.S. Department of Defense.  In this role, she served under both the Obama and Bush Administrations and split her time between Washington, D.C. and Baghdad, Iraq.  Sara specialized in strategic communications, business development and women’s issues, and worked extensively throughout the Middle East.  Prior to this, Sara served as Communications Director for the Deputy Secretary at the U.S. Department of Housing and Urban Development.  At the same time, she also served as a lead press liaison for President George W. Bush and Mrs. Laura Bush, primarily focusing on global issues such as malaria prevention, women’s health and refugee relief.  In this capacity, she traveled to over a dozen countries including Thailand, Israel, Saudi Arabia and Ghana.

She began her career at the White House, serving in the Office of Media Affairs as both a special assistant and website coordinator from 2003-2006.  She holds a B.A. from Hope College and a M.B.A. in finance and entrepreneurship from Tulane University.